DriveExport 3.8.0 BETA is out. It contains some performance improvements. Among them, we decided to remove the MD5 files verification. In previous versions, DriveExport checked the MD5 of every already downloaded file comparing the hash with the corresponding stored on Google. This activity is time consuming and generally not very useful. To revert to previous behavior, manually add the following option in the configuration files:  <ActivateMD5Check>true</ActivateMD5Check>

This article clarifies the licensing terms of DriveExport and how to correctly compute the number of user licenses required for a G Suite subscription.

Google Drive documents can be stored in one of two different containers: My Drive or Team Drives. My Drive is the personal user storage area. Team Drives are shared areas that are not owned by a single user – several authorized users within a company have access to the files stored inside.

DriveExport supports the export of Team Drives and should be licensed to the corresponding number of users that have access to Team Drives. This way, we can keep a simple and convenient licensing model, without applying a limit to the number of files exported.

DriveExport 3.5.7 is out. The new version has some performance improvements and a new useful option: GoogleAcknowledgeAbuse. If you got errors like

and you are absolutely sure the files are legitimate, you can activate the option to allow DriveExport to download them. Keep in mind you do that at your own risk. Sometimes Google is wrong in marking files as abusive (malware, virus, etc.) but generally it’s right. Activate the option only if you really need it and you’re sure the files are legitimate.


How to locally backup all your company Team Drives

It’s important to have a local backup of company Team Drives files. They are a valuable company asset – sometimes the most valuable – and having a local copy of company files stored on cloud is always a clever idea.

More and more companies choose to use Google G Suite services. Among them, the two more popular services are Gmail and Team Drives. Often, they amount to as much as 90% of the “know-how” of the company. In particular, Team Drives hosts one of the most valuable assets: the documents.

Cloud services – like G Suite – allow our companies to be more dynamic, adapt faster to changes, have a greater control of costs, but pose many threats, too. For documents and files, one of the more dangerous risks is the loss of them; not even to mention the temporary non-availability. The former could be very problematic for a company and in some cases could also have legal implications. The latter could temporarily place at risk the company activities – interrupting online services and damaging company reputation.

In both cases DriveExport can come to your assistance. DriveExport has the ability to create a full local dump of all company files stored on Team Drives – and also on user’s Google Drive. This is valuable in helping to create a “security copy” for archiving and, in case of emergency due to connectivity issues, it could also be used as a read-only source of company files.

The local copy created by DriveExport is a standard set of files on local file-system. No custom or proprietary datastore-system is used. This way, the resulting files – organized in standard folders and subfolders – can be easily backed-up by on-premises company’s backup systems. This approach guarantees:

DriveExport 3.5 is out! It contains performance improvements, check of the files integrity, some bug fixes and a work-around that allow to export Google documents bigger than 10 MBytes (details here and in the documention).

Ransomware are becoming the main threat for today’s data. Companies put in place many countermeasures to prevent ransomware attacks and protect data. A commonly defense is a regular offline back-up of the files. This approach works fine for classic and on-premises files repositories. The whole file system – or a part of it – containing relevant files is regularly backed-up using backup software already existing in the company. However, you cannot use the same process for on-the-cloud files, like files stored on Google Drive.

Unlike common company files, files stored on Google Drive are not centralized on servers. Normally every user has his/her local copy of the files, brought to his/her PC by Google Drive sync clients. This situation would require to backup every user PC, which is a complex and hard task. Moreover, the local copy could be partial, which complicates the entire situation.
There are also cases or configurations where files are normally persisted only on Google Drive and locally downloaded when required. The Google Drive File Stream client works this way. In such a situation, it is impossible to get a complete user’s local copy.

In case of a ransomware attack, local files are encrypted and locked. The files most targeted by ransomwares are those most valuable for a company: documents, images, worksheets, PDFs, etc. Usually, they are the same files placed on Google Drive. During the attack files are encrypted by the ransomware and this triggers the local Google Drive client to perform a synchronization with the cloud. From its perspective, they are locally modified files that must be uploaded to the cloud. Shortly, all files are delivered to the cloud and original files are replaced with the encrypted versions. And this is not the end of the story. If the files are shared with other users – as single files or folders or Team Drives – all the other users receive the encrypted version of the files. As a result, a single compromised PC can impact many users working on other computers. 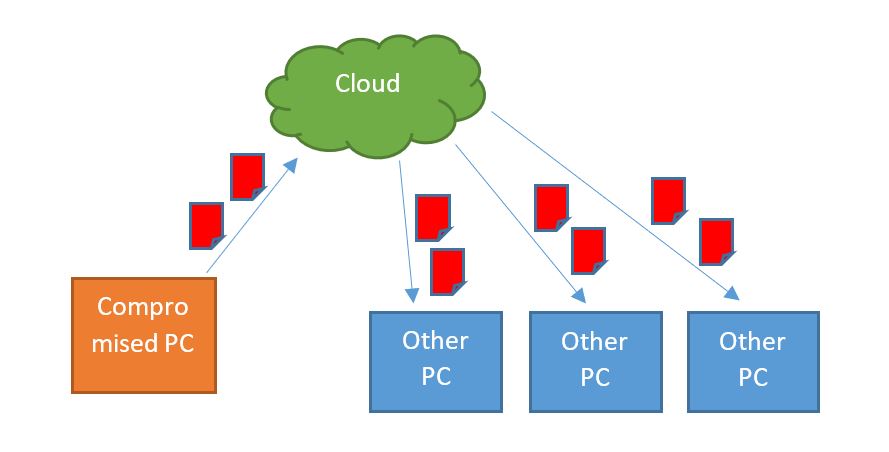 The root cause is the always-on-line architecture of Google Drive. If the network is available, files are continuously synchronized to and from the cloud. The only solution is to create a secured offline copy. DriveExport comes to help. It creates a local copy of all the files stored on GSuite Google Drive, both personal and Team Drive files. That local copy can be archived and secured using a traditional backup software for local files.

Enterprise companies can archive cloud- files using the same standards, processes, and tools already in place for archiving and backing-up traditional files, without the need of new software and standards only for managing cloud-files. DriveExport works as a bridge to bring files stored in the cloud to local storage, also allowing to archive them using backup tools already existing in the company.

We are very proud to share a customer story published by Google where Weiss + Appetito – a group of companies working in construction services for almost a century – describes how they adopted G Suite using DriveExport to automate the backup of the files on-premises using the Google Cloud APIs.

“Weiss + Appetito managed the migration of all of its files from its previous servers and systems onto Google Drive, … We use Google Cloud APIs to back up everything every night onto a storage facility near Bern, Switzerland. It’s an additional measure we like to take, and DriveExport makes it very easy.”

Using DriveExport,​ ​they regularly​ backup ​their files from Google Drive on the cloud to their data-center in Bern, Switzerland. Having a local copy of their files – a very valuable company asset – makes them more comfortable using a cloud-only solution like G Suite.

We are aware of a known limit (bug?) of the official Google Drive API. It is not possible to export Google native items – such as documents, spreadsheet and presentations – which are greater than 10 MB. END_OF_DOCUMENT_TOKEN_TO_BE_REPLACED

It contains bug fixes and some improvements.

We encourage our users to upgrade.

We are proud to announce the availability of DriveExport 3.0. This new version has a big new feature: it now supports Google Team Drives! You can export files from both user drives and team drives using the same license. The Team Drive support can be activated for free on existing paid licenses. END_OF_DOCUMENT_TOKEN_TO_BE_REPLACED

These days we all use a big variety of online and cloud services addressing many needs: emails, payments, collaboration, file storage and so on. Normally, we trust these services, but we might also be worried about the possibility of data loss or of a temporary data unavailability. Our worst nightmare is to wake up one day, open our preferred service and find it completely empty. A scary scenario for a single person, but more like a disaster for a company that stores many files and data there. END_OF_DOCUMENT_TOKEN_TO_BE_REPLACED